A slight change in tack this week.  As the European winter is still nearly 3 months away, how do we get our vertiginous fix?  Well, there are mountains within easy reach of all major British cities, and whilst skiing isn’t the easiest sport to attempt on slopes of around 1000m, one can still get out in the wilderness and enjoy them.  Mountain Rescuer Dan Knox is no stranger to mountains, spending most weekends tramping around in the freezing wet in preparation for another urban warrior who has thought, “I didn’t need food or water-proofs.  It was sunny when I set out.”  In this piece, Dan describes one of the more challenging walks the Welsh mountains has to offer: the 3000s.  From London, you can drive up on Friday night, get a few hours sleep in the car, smash out the challenge and be back in time for Sunday roast.  Just think about that the next time you complain that the great outdoors are inaccessible from London!

Whilst tackling a trek up to Everest Base Camp in Nepal, my friend Rob and I decided to plan our next adventure closer to home because of the cost of travelling abroad.  Back in Kathmandu we agreed, over a pint and hearty steak, to embark upon the challenge of the Welsh 3000’s.   This involves climbing to the peak of the 15 summits over 3000ft in the Snowdonia range, covering 3 valleys in total.  Oh, and you have to do it in 24 hours.  Given that I lived only from the Snowdon range, it seemed a no-brainer – I was looking forward to a genuine challenge on my doorstep.

Having done a quick bit of internet browsing for information on the challenge, we set about researching the route itself.  This seemed simple enough: find the grid reference points of each peak on the map, and construct some sort of route.  It was only then that we realised the level of challenge we had set ourselves – although only around 26 miles as the crow flies, the elevation gained and lost, over and over again was staggering!  As there were only 2 of us doing it (without the recommended support team) we had to really plan what we were going to do about food and water, not to mention how to get back to the start when we had finished.  With the food and water ‘hidden’ in black bin bags amongst shrubbery and behind rocks along the route, we were set.  The longest day in the year that we could both attend was upon us and the Welsh 3000s Challenge could begin!

We set off in 2 cars at about 10pm on Friday night and started off by dropping 1 car at the finish point and then went to the food drop points.  The challenge starts at the top of Snowdon and on a previous attempt I had slept on Snowdon and consequently failed (possibly due to a lack of sleep).  Based on that experience, we decided to sleep in the car park at the bottom and do the whole thing in one go.  Unfortunately, 3am came and we were on our way up Snowdon in complete darkness, with bad weather to accompany us!  As the timed challenge doesn’t start until you reach the top, we tried to conserve as much energy as possible, whilst still keeping in mind that there are only a limited number of daylight hours available.

After reaching the top of Snowdon around dawn, the challenge proper began.  First up: Crib Goch!  I hate heights and this was a real challenge for me.  The only good thing was that, because the weather was so bad, you could not see the height of the drop either side along the knifes edge that runs up to the summit!  We scrambled relatively slowly here, as it’s a really dangerous ridge, made more challenging because the rain made it wet and slippery.  After Crib Goch we met a road and one of our food bags.  We sat in our warm car for half an hour and refuelled.  Elidir Fawr was the next peak: I can only describe it as a wet and boggy grassy slope that lasted for about 2 to 3 hours!  It was horrendous.  We both put on our iPods and plodded to the top, but the next couple of peaks went very well, and before we knew it we could see the spectacle that is Tryfan, coming up in the distance.

This is a classic ‘mountain’ shaped mountain, and the only one that I had not been up.  Whilst we were doing well for time, we still had Glyder Fach to tackle and then the two peaks that make up the Glyders.  Fortune favoured us and we met a couple of fell runners who offered to take us up the quickest route.  Within an hour, we were on the top and the weather had changed and the sun came out – allowing us to dry out whilst making our way down the steep decent down to the road where we had our 2nd and last food bag waiting for us in a hedge.

We were on our last major accent up on to the Carnedd Section, with a clear run of around 10 miles from the top to the finish with few hills left to deal with.  The only problem was that the map had fallen out of my bag.  After a few harsh word, followed by a few apologies, we decided to carry on without a map (upon reflection, not my best decision) as we had walked the route the previous year and the weather was holding up well for us.  Nonetheless, there were a few false turns, which certainly had an impact on our finish time.

I have never been so happy to see my little Golf in the distance as we walked down the long gradual hill to the finish point and we were looking at a very respectable 17-hour finish time.  The last couple of miles didn’t count, as the time starts on the first peak and finishes on the last peak, so we were able to ease off a little on the pace (we had to finish in day light as we were not prepared with any camping gear!).

Overall the challenge was fantastic, and a great way to see pretty much all of Snowdonia in one day!  After a well-earned Big Mac on the way home, we started thinking of our next challenge…  I have heard of the 3-Peaks Challenge (climbing the 3 highest peaks in Great Britain consecutively) being done by cycling between mountains – which would certainly put a slightly more challenging spin on it! 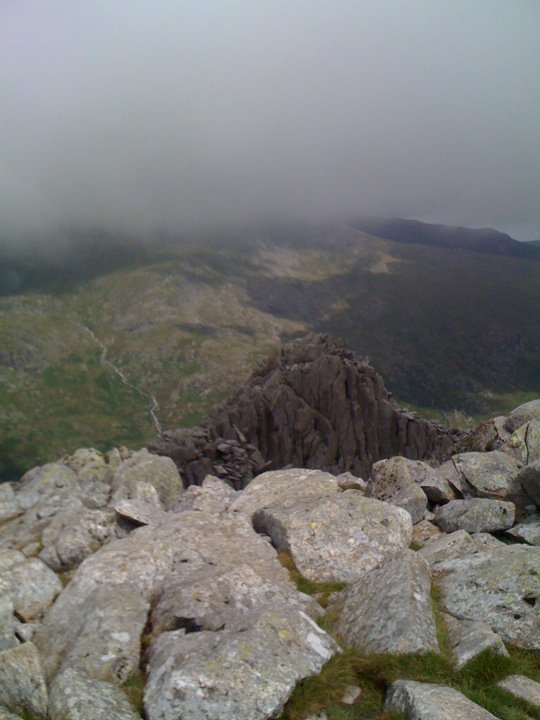