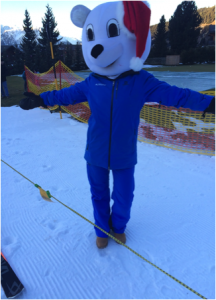 When joining my shadowing group I was a little nervous as I didn’t know what to expect but after meeting the group that I was going to be shadowing it was evident that the week was going to be enjoyable. I had the privilege of shadowing a level 2 polar bear group who would hopefully be level 3 by the end of the week. It was great to see the kids go from skiing on the flat to skiing all the way down la chaux with ease. Learning styles of teaching from the instructor I was shadowing was a rewarding experience as it allowed me to learn new techniques, which I could then potentially use when instructing.

When approaching a group of 7 girls of ages between 6-8 you get an overwhelming feeling of responsibility. Many thoughts went through my head; will they be better then me; what if they start crying; or even what if I fall over! But I was greeted with smiling faces and girls eager to hit the slopes. Shadowing really opened my eyes up into the way of treating children and how they have to be entertained constantly or they would total switch off! We would always start off with a snow dance (which we can see never worked) and then would head down the slopes concentrating on certain aspects of their skiing. However many of the girls were determined to bomb down the slopes instead of turning. In the end I had a great week and loved spending my mornings entertaining all the girls, and definitely learnt a lot, which I would use in my own teaching. 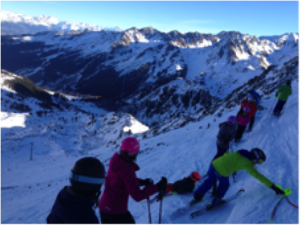 When I was told I was going to be shadowing race camp, I was a little apprehensive at first. I was with 7 kids aged from 8 to 13. On the first day we skied two itineraries, Tortin and Mont Fort, both being quite rocky and a little icy. Although at the start I was a little bit anxious, as the week went on I really enjoyed shadowing this group of kids, as I could see the progression they made, even if they were at a very high level of skiing. I also took away really unique techniques, which not only will help with teaching, but for my own skiing use too. Overall I found this week of shadowing very beneficial and rewarding, as it will help me develop my teaching skills and has increased my confidence as I can bring in the techniques I learnt, into lessons.