Studying Abroad: Ranking the Best Locations around the World for SkiingBLOG

Skiing has a plethora of health benefits for both our physical and mental health. For instance, it releases a flow of endorphins, adrenaline, serotonin, and dopamine. It also eases stress and therefore relaxes you.

With all the benefits that come with skiing, it’s no wonder that some of you may be wondering where the best locations are around the world for skiing while you’re studying abroad.

Here at Altitude Futures we believe there’s nothing better to do during your free time of studying hard than hitting the piste.

We have therefore explored some of the best ski resorts, and looked at Universities close by, to ascertain where the best locations are to study abroad if you’d like to hit the slopes in your free time.

For this analysis, we retrieved a seed list of the most popular ski resorts in 2022 and used Google Maps to discover where the closest university is and how far away from the University in Kilometres the ski resorts are.

We then looked at how many ‘easy’ or ‘beginner’ slopes the resort had, and the length of the ski season to find out which are most suitable for students who have just moved to the area and love skiing.

We then used Numbeo, to reveal the average cost of rent and transport in each location, to discover which was the most affordable for students. (If the exact location couldn’t be found, the closest city or country average was used)

The ranking factors we explored are

Finally, we took all these factors into account and assigned each ski location a number out of 90. We then ranked the destinations by how many points they received to help you make the most informed decision for when you study abroad.

And the results are: 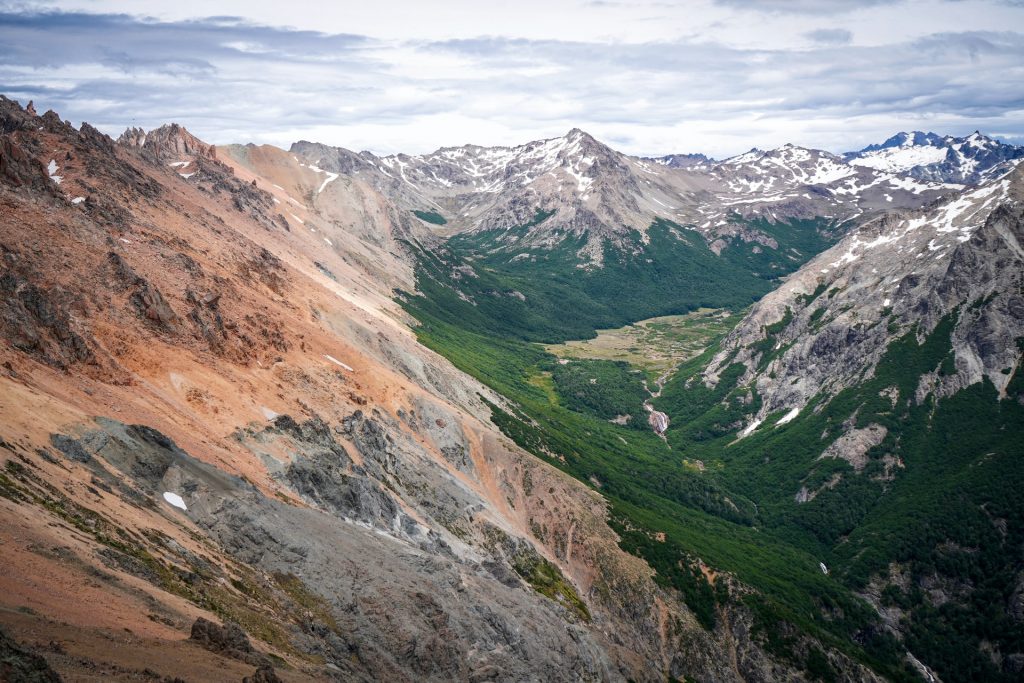 The Cerro Catedral ski resort ranked first and scored 69 out of 90 points. It is located just outside of Bariloche in the stunning Nahuel Huapi National Park in Rio Negro, Argentina. This region is also home to the Lakes of Patagonia, roughly 1,000 miles southwest of Buenos Aires, Argentina’s thriving capital.

The closest town to Cerro Catedral ski resort is San Carlos de Bariloche. The town and ski resort are just 12 miles apart and the distance usually takes 25 to 30 minutes to travel for students with a car.

The Cerro Catedral ski resort is best suited for intermediate and advanced skiers, but there’s also adequate terrain for students who have never skied before.

Catedral is also well-known for its excellent tree skiing, and expert skiers have a variety of alpine off-piste options as well as backcountry chutes and bowls. 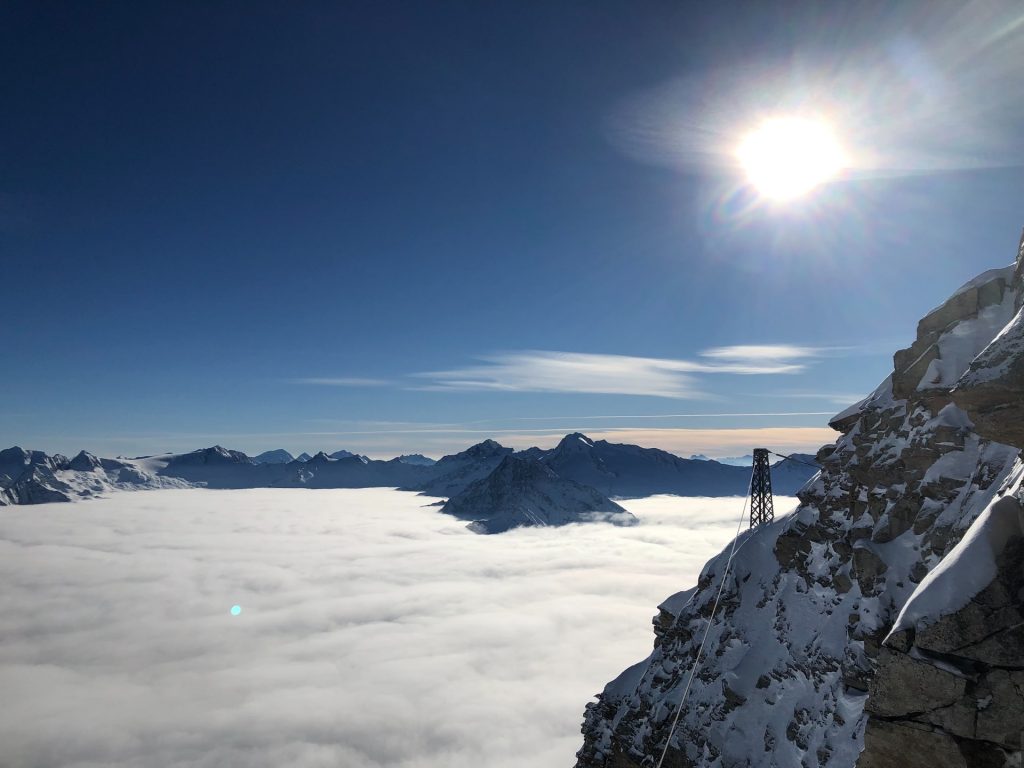 Kitzbuhel ski resort ranked second and scored 68 out of 90 points. It is primarily in the Tyrol (Tirol) state of Austria in the middle of the cities of Innsbruck and Salzburg. The town of Kitzbuhel is picturesque with its old city walls, numerous cafes, shops, bars, and restaurants littered around the centre.

For students wishing to ski while studying abroad, this charming medieval town of Kitzbuhel certainly has a skiing pedigree. Recent investment in snowmaking and the lift system also means the queues and bare slopes have become a thing of the past. 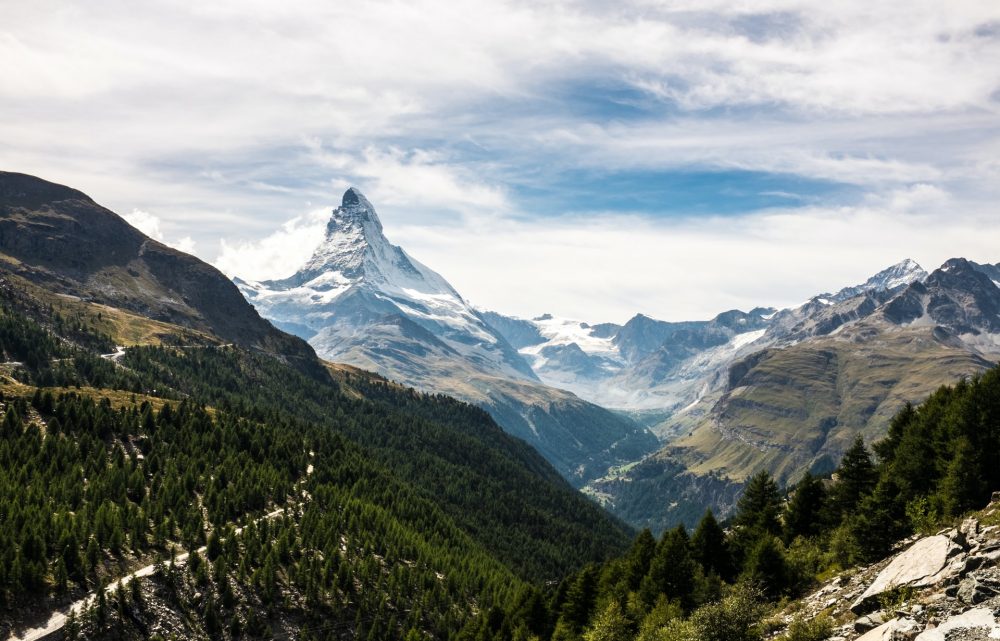 Zermatt ranked third and scored 67 out of 90 points. It is located in the south of the Valais (Wallis) canton in southwest Switzerland, near the Italian border. Zermatt’s ski resort is also linked with Cervinia.

Zermatt ski resort is widely considered to be one of the best in Europe due to its endless on and off-piste terrain, remarkable snow records, charming villages, and stunning scenery.

The ski resort contains four main sectors; Rothorn, Gornergrat, the Matterhorn Glacier Paradise, and across the Italian border in Cervinia which are all connected by a state-of-the-art lift system. 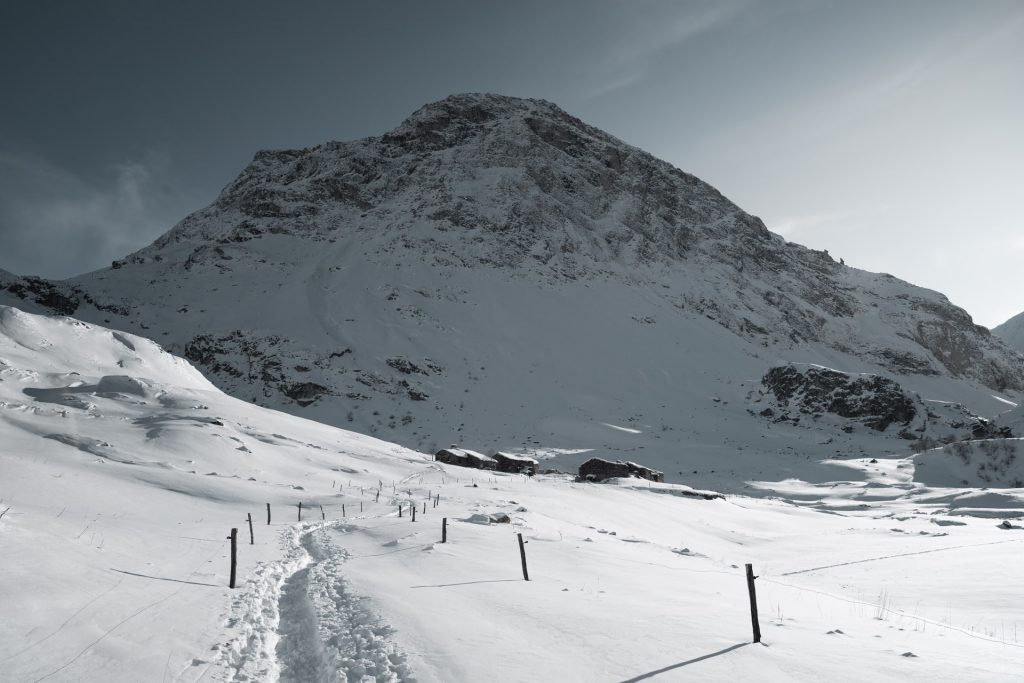 The ski resort offers a large variety of ski areas with great snow and optimal weather conditions for students looking to ski while studying abroad.

Val d’Isere is one of the world’s most celebrated ski resorts and is famous for its extensive ski area and challenging off-piste terrain. It’s the perfect ski resort for intermediate and advanced-level student skiers and snowboarders. 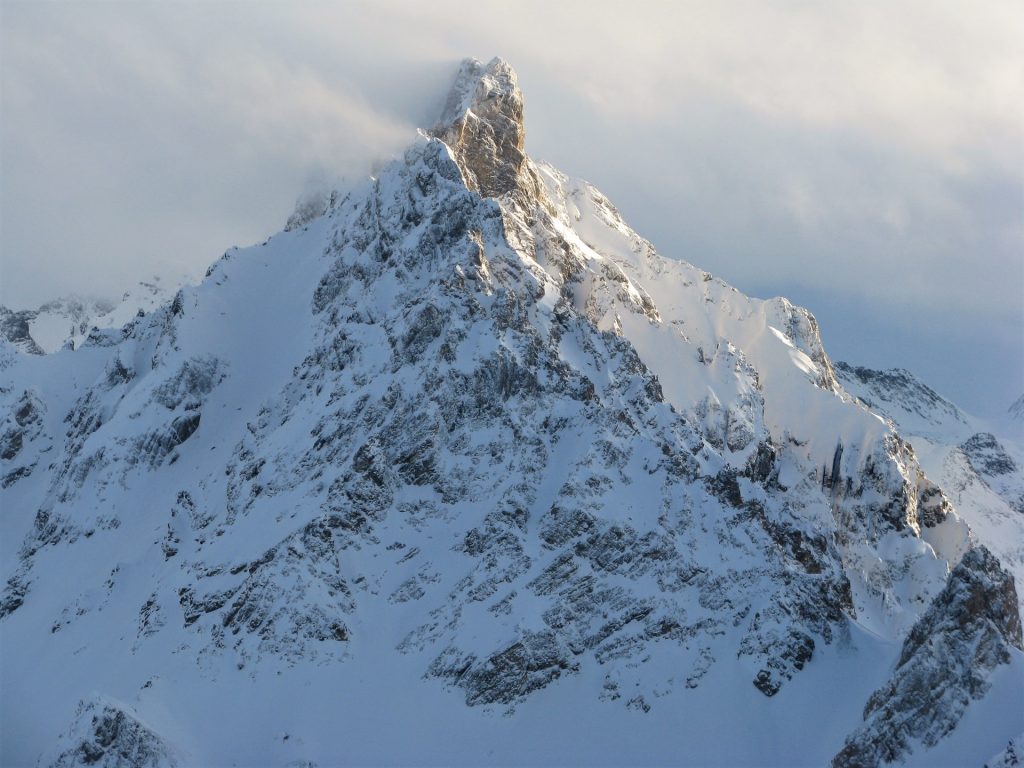 Courchevel ranked fifth and also scored 66 out of 90. It is a French Alps ski resort and is part of Les Trois Vallées, which is the largest linked ski area in the world. Courchevel is situated in the community of Saint-Bon-Tarentaise on the south side of the Isère Valley, 57 miles east-southeast of Chambéry by road.

Courchevel’s slopes are amongst the best in the world, especially for beginners and intermediates. Courchevel has a three Valley lift system, which includes the resorts of Meribel, St Martin de Belleville, Les Menuires, Val Thorens, and La Tania.

The Ski Resort is an excellent choice for students who class themselves as Beginners and Intermediate Skiers.

It is important to note, however, that although Courchevel may be one of the best ski resorts in the world for beginners and intermediates, students will have to pay a premium for its beautifully-groomed and confidence-boosting pistes. 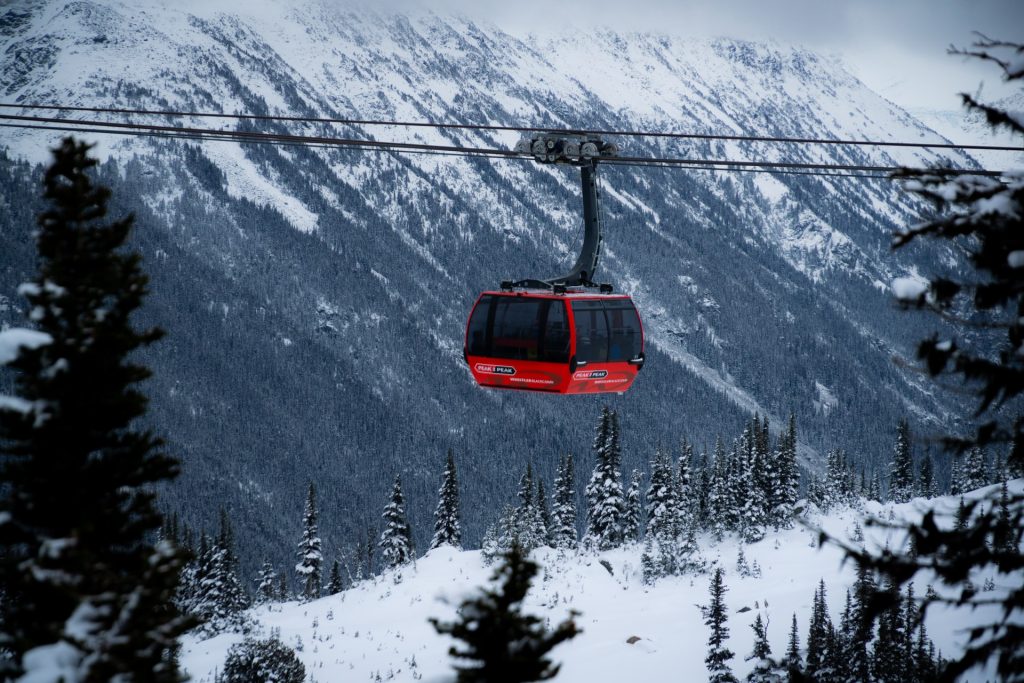 Whistler ranked sixth and scored 59 out of 90 points. It is a town north of Vancouver, British Columbia, Canada, that’s home to Whistler Blackcomb, one of the largest ski resorts in North America, which has the greatest uphill lift capacity.

The ski resort features the Peak 2 Peak Gondola for travelling between Whistler and Blackcomb mountains at the top. It is renowned for its alpine terrain drawing skiers in search of mind-blowing landscapes.

At lower elevations, the coastal climate delivers a stunning contrast to the volcanic alpine environment, where students will be able to view glacier-fed lakes, forests, waterfalls, beaches, parks, and even golf courses!

Besides skiing and snowboarding, students can also enjoy snowshoeing, tobogganing, and ski jumping at the Olympic Park in the area. 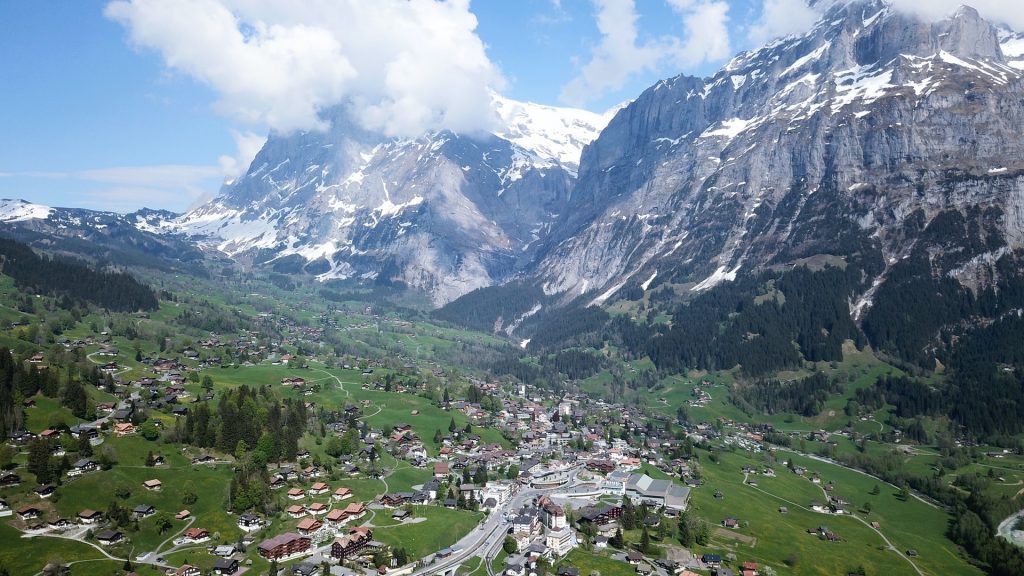 Cortina d’Ampezzo ranked seventh and also scored 59 out of 90 points. It is a town located in the southern Alps in the Province of Belluno, in the Veneto region of Northern Italy. Cortina d’Ampezzo stretches from Falzarego Pass to Tre Croci Pass in the Ampezzo Valley and is crossed by the Boite River and its tributaries.

The town of Cortina d’Ampezzo is home to some great restaurants and bars, as well as a range of impressive shops. Cortina is Italy’s most fashionable resort and attracts visitors from across the country because its ski resort has some great terrain and some truly breathtaking scenery.

It also possesses some amazing areas that are perfect for students who are beginner skiers. The reliable snow conditions aid the progression on to the long, gentle blues above Socrepes.

Cortina d’Ampezzo ski resort is also great for intermediate skiers as they will love the long reds, through to the blues, which are the easier less steep slopes, all on the Tofana side of the hill. Intermediate skiers will particularly enjoy the extraordinary ski runs near the summit that have spectacularly unique views. 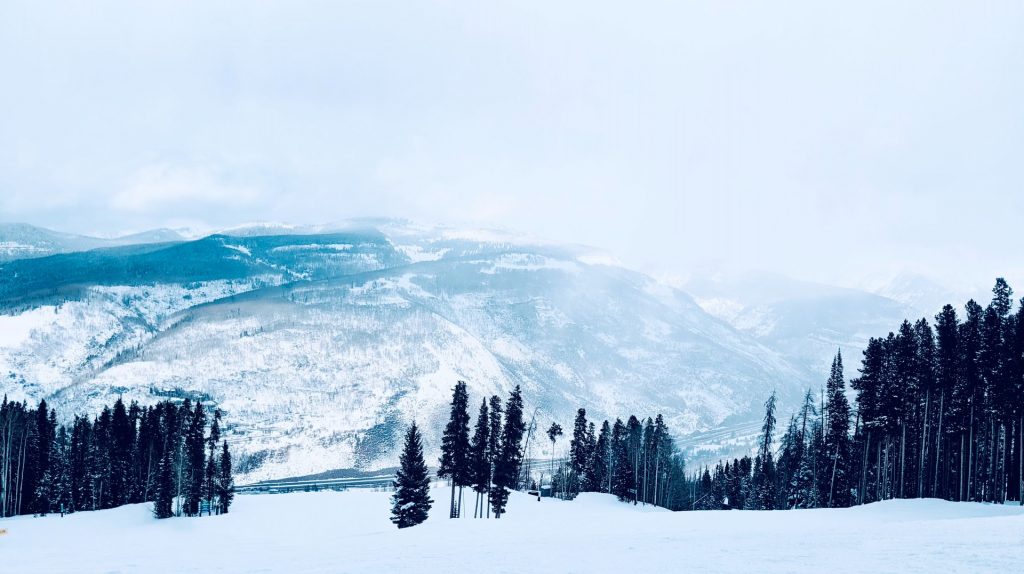 Vail Mountain Ski Resort ranked in eighth place and scored 56 out of 90 points. It is the third-largest single-mountain ski resort in the United States. The ski resort is situated in the remarkable central Rocky Mountains just 30 miles east of Eagle, Colorado, and only 100 miles west of Denver, Colorado.

The terrain is perfect for advanced skiers, both on-piste and off-piste. It is important to note, however, that Vail Ski Resort is not ideal for intermediates because of the huge number of easier blue runs. 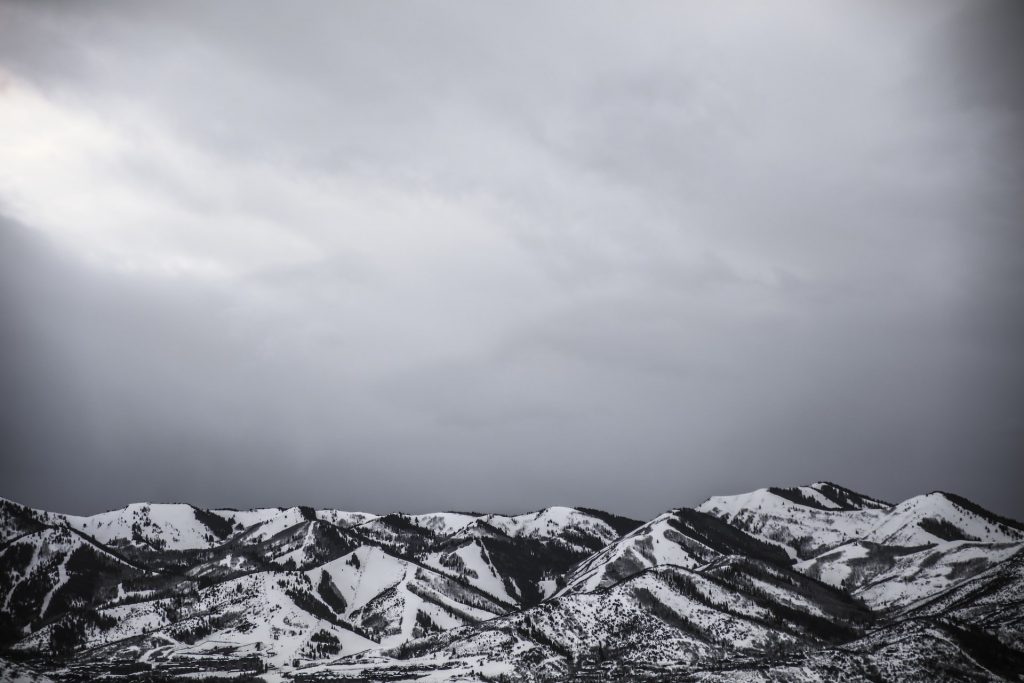 Park City ranked ninth and scored 56 out of 90 points. It is situated east of Salt Lake City in the western state of Utah and is the largest ski resort in the United States. The ski resort is bordered by the Deer Valley Resort and the large Park City Mountain Resort, which are both well-known for their ski slopes.

The ski resort is a great place for students who are both beginner and intermediate skiers. This is because it is the largest ski resort in the United States with a vast array of ski slopes to explore. 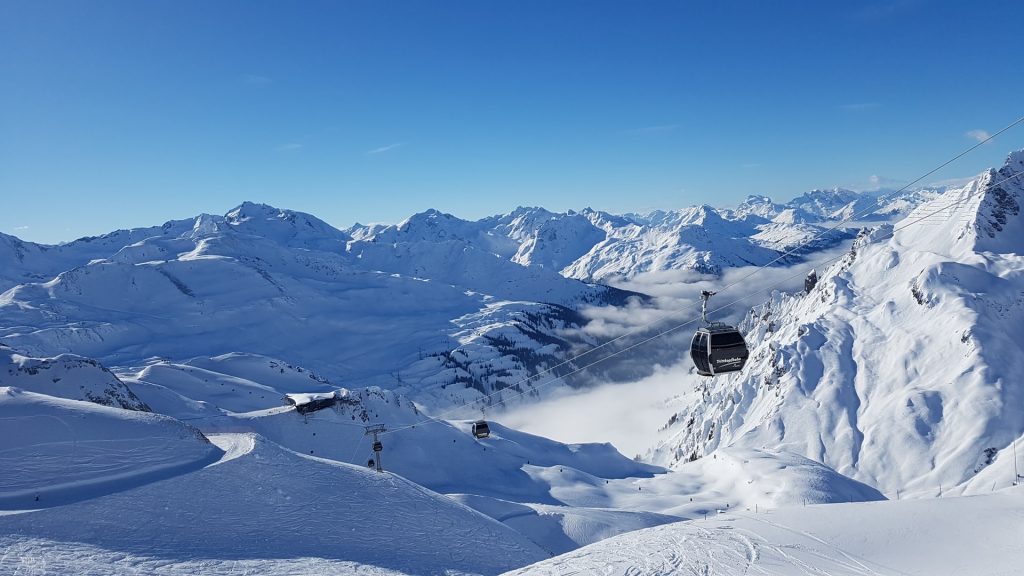 Finally, St Anton ranked in tenth place and scored 54 out of 90 points. St Anton is a village located in Austria in the Tyrolean Alps. It’s known as a gateway to the Arlberg ski region and is often termed the “cradle of alpine skiing” for its huge role in inventing the sport.

St Anton is a large resort town, spreading out along the valley. Après ski is a major attraction in this resort town. It is one of the oldest resorts in the Alps and is full of stylish hotels, restaurants, and chalets.

Those student skiers who love powder naturally fallen snow that has not been compressed will be attracted to St Anton. Although many of the resort’s runs are more suited to experienced skiers, there’s also plenty of skiing for beginners to enjoy too.

After exploring the best skiing locations around the world for studying abroad, we’re sure we’ve got you in the skiing mood.

For those looking to become a skiing instructor, and earn a little extra cash while studying abroad, why not look at our range of training programmes.

We are amongst the best professional ski trainers in the industry and we are recognised as one of the most established training providers in the world.