Its race training time with some Stubbies, so Monday comes nice and hot and it’s just me and Matt with Alessandro coaching us. First day doing some racing for a while so we do it on very flat terrain. I’m on normal piste ski’s and Matt’s pitched up on park ski’s…….. smart move Matt. So anyway we set the gates as a slalom for the first few and then it widens out a bit and we then start hitting them. The course is super fun although it’s very flat but its fast. We quickly set ourselves aims for the course time wise and Ale starts to ramp us into a competition between us. I start more than a second ahead of Matt after our first run but the skis have a lot to say in this as Matt’s skiing very well. He starts to close down the time gap but I end up after the morning about half a second ahead of him which Ale doesn’t let him forget at dinner later that night.

So Tuesday comes and similar weather again but we are going steeper this time and we have 2 more joining us so more competition. So Harry and Lawrie have joined us and Harry, Matt and I are all on FIS skis. Lawrie’s on a high end piste performance ski. So we set the gates on a poorly groomed piste and we then all do a run. Me and Lawrie both put down times but the other 2 have bails and don’t get a time down. My time is 19.66 Lawries is 20.76. So we head back up and do another run. I go first and have a big bail, lose both skis and slide 150m on my back. No injuries which is good. Matt then comes flying down and bails as well. He hasn’t got a time down and Harry and Lawrie set times. Harrys at about 20.07 and Lawries 20.50. Next run we finally all get times down. Matt sets a solid 19.8. I move into 18.86 and Harry has a good time of 19.7 and Lawrie gets 19.90. He has a half second taken off due to his skis and we are racing for a beer. Loser buys. So we set off again all talking about aims for times. Me and Matt reckon there’s a 17 up for grabs. Matt goes first again and set a good time of 18.80 and then I go and move the time down to 18.40 and Harry get a 19.20. Lawrie moves down to 19.70. 2 more runs to see who’s the victor. Lawrie goes first and gets a 19.55 and he’s annoyed with that. I go next and move down to 18.29, felt good but could have been better. Matt comes down and sets a time of 18.60 just Harry to go to make it a good run for all of us. He tucks early, catches edge just before the finish and does a flat ground 360 and crosses in 18.90 very good in the circumstances. So we go into the last run all to play for.

I go first and almost have a bail but keep on my feet and knock my time down to 18.21, with a bail at the end not sure what happened but its bent my break out of place. Lawrie comes down and sets a good time of 19.36. It’s all to play for the beers as Lawrie has moved into 3rd with his time to take off. But Harry comes down and breaks Lawries heart with a 18.60. Matt then comes down and secures a 2nd place and sets a time of 18.30.

It was a great morning, a few funny wipeouts and lots of laughs and good competition and improvements from everyone be over a second. 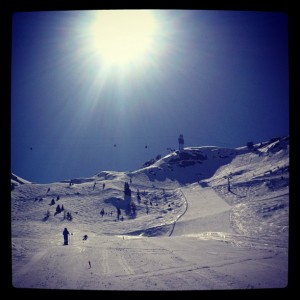 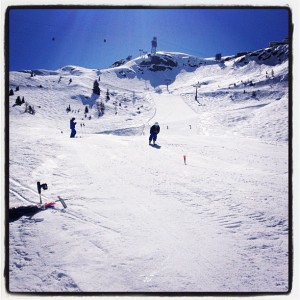