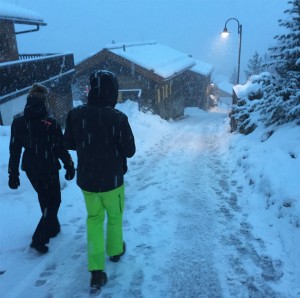 The week began as the last ended, heavy snowfall and visibility which didn’t extend much beyond a few feet in front of you. This sounds like a complaint but unfortunately it’s an inherently British trait. I can only compare it to when we don’t get warm weather during summer and then suddenly we do and everyone complains it’s too hot. It’s important to remember we are blessed to have these conditions because too much snow is better than no snow.

This week also included our first aid training. The training is a mandatory part of the course and something you have to have if you want to go on and work as an instructor. We learnt basic first aid and applied it to the injuries and accidents we might come across teaching clients and generally in a mountain environment. I wasn’t aware that in Switzerland and the majority of Europe you are legally obliged, as an instructor, to stop and help someone who has injured themselves on the mountain whether they are your client or not. In America, no one administers first aid out of fear of being sued for doing something wrong. I know I would rather someone tried to save my life than wait and maybe it be too late by the time the emergency services arrive. Interesting to think about though…

Lost my ski in the powder

We’ve had a bit more free time this week in the afternoon to practice our short and long turns for the level one exam. I managed to lose my ski on one deep powder section. I did exactly what you’re not supposed to do and I forgot where I fell over making the process of actually finding the ski, extremely difficult. A very nice German man had also lost his ski, he helped me for a bit but once he found his own ski, he left. I don’t blame him, the conditions were great. Eventually, after twenty minutes of furiously stabbing at the snow and cursing myself for falling over, my pole connected with something ski shaped. About a metre down I found my ski and I have never been so relieved.

Wednesday night was Farinet apres ski. Local band, Men On the Hill, played well known rock crowd pleasers. I think the best bit of advice I got for this particular night is to never wear any item of clothing that you are fond of. All throughout the evening people throw their pints into the air and onto the surrounding people, forgetting, I think, how much they paid for the pint! Friday night, we celebrated our resident Aussie, Sam’s, birthday. Having come from quite literally the other side of the globe, Sam has been suffering from pretty bad jet lag but on Friday we all got together to celebrate his birthday. He even got a cake from our amazing chefs at the chalet. The night was a lot of fun and it was good to see all the January gappies out as well as the gappies who started in December.

We all have one eye on the level one exams next week. The coaches have done a great deal to get us into shape for the week ahead. The rest is up to us now. Fingers crossed!