If i didn’t know before, I know now that you need a great deal of patience and energy to be a ski instructor. Other virtues are of course important teaching this sport but those are the two I’ve picked out over the last week of shadowing the Altitude instructors. Dan and myself, were shadowing Alex who was teaching a girl called Millie. Millie was one of the most confident and energetic skiers of her age I’ve met. Anything Alex suggested: bumps, powder, steep runs. Millie would try to get down before us all. The focus for the week was to try and get her to ski in a slightly more technical manner but without throwing loads of technical words and drills at her. Something which Alex achieved in a seamless manner. I think that’s one of the biggest skills I’ve picked up on this week, teaching without appearing to be teaching. Not so many drills but more imagery that kids can use to picture the feeling they should get in their skis or boots. Especially for kids because to a degree they just want to ski as much as possible in a couple of hours; whereas adults might appreciate a bit of explanation. 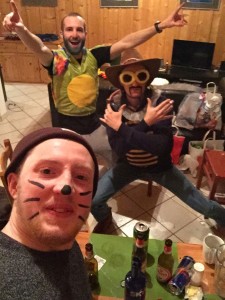 This week was also Mardi Gras. In the UK, this day is reserved for eating as many pancakes as is humanly possible but in most of Europe it’s a big day celebrating in fancy dress. We had a great array of costumes with no one particular theme but it was a lot of fun seeing everyone try to squeeze into the only costumes on offer aged four to six at the local supermarket.

An opportunity came about for me to teach for Altitude’s ski school in Grindelwald. They were short on instructors for the busy week ahead and I was never going to turn down this great experience. After getting myself organised for the trip in a very rushed manner, the next day I set off for Grindelwald using Switzerland’s wonderfully efficient train network. Just shy of three hours later and I’d arrived. Grindelwald is a beautiful resort. Nestled underneath the enormous Eiger mountain it takes you a second to adjust to this gigantic piece of rock luring down on you. It’s certainly much smaller than the resort I’ve spent the last seven weeks, with one main high street but this was a welcome change of pace.

For the six days I was due to teach for Altitude, I had been given a young boy called Arun to teach in the mornings. He was a complete beginner, very keen to learn and absolutely taken by the new environment he was in. The first day was spent mostly getting him used to this new place he was in, getting him used to the kit and of course, lots of playing in the snow. This left me the afternoon to explore and get to know this resort I’d never visited before. It turned out to be a pointless venture as the cloud came in and I could barely make out the piste markers in front of me let alone the layout of Grindelwald. 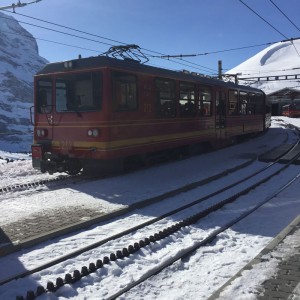 On my second day it turned out one group of kids were going to be made into two and I was going to be teaching them. They were level three skiers meaning they could ski in a plough shape and were comfortable on blue runs. With not many blue runs on offer in Grindelwald the choice of route was fairly simple. One of my favourite aspects of this resort is the trains. From the town centre you can take a train up into the mountains where you will reach the main ski area. It was the perfect route for my lesson because you can make your way down to one of the lower train stations, stop for a hot chocolate break and get the the train back up to the top to meet the parents for the end of the lesson. Also taking the train is quite exciting, if the kids didn’t enjoy the journey. I did at least.

Advice from other ski instructors

I have learnt a great deal during this week of teaching. I was very keen to keep my ears open this week to bits of advice flying about from one wise instructor to another. I think the best nugget of information was actually about how to deal with parents though. While it was children I was teaching, the parents are the ones who are more concerned about the lesson. After all, they are the people paying for it, in most cases. Manage their expectations. That’s what I was told and it seemed so obvious to me as soon as I was told but I hadn’t even asked Arun or any of the other kids parents what they wanted from the weeks lessons. Did they want them to be doing backflips or were they just content if they enjoyed themselves but the most they succeeded by the end of the week was putting on their skis? As soon as you know one way or the other, it makes it easier to work towards a goal at the end of the week. I have also learnt that you may have the best drill or game that you spent hours thinking up but in a second the person you are teaching will let you know if it’s going to work or not. Something I experienced this week with a quizzical look from the kids as I explained my amazing drill. It is also true to say that just because it didn’t work for one individual doesn’t mean it won’t for someone else.

A week of skiing lessons is quite a long time so I was quite anxious that my complete beginner, Arun, made some progress during his time with me. I’m not really sure if it’s something I said, but towards the end of the week something clicked for him and he started to turn the ski. I was so happy for him and selfishly, happy for myself too. To see him grinning ear to ear was one of the best experiences I’ve had and to add, his Dad got to see him finally crack what he’d been struggling with. My biggest aim for the week was that he enjoyed the experience of skiing. Getting the balance between having fun and learning seems to be the challenge when giving a ski lesson. I was very aware of not pushing his progression too fast and then he’s put off skiing for life. It was great to end the week on a positive note for both my morning and afternoon lessons and to come away hopefully having passed on some tips to those I taught but more importantly that they had fun.