It’s fair to say the level two BASI ski instructor course is more of a marathon than a sprint. Two weeks of being examined took a great deal of physical and mental strength to perform consistently well. Although this was an exam and as with any exam feelings of nausea are usually present for me, our examiner created a fairly relaxed environment which put the group more at ease. 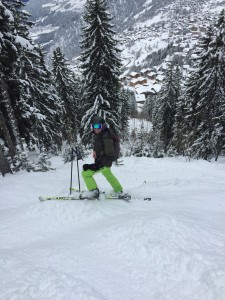 Halfway through the first week of the exams, we were lucky enough to receive a healthy dumping of snow. Having spoken to a few people who have been in Verbier for several seasons, they said conditions haven’t been as good as this at this point in the season for a long time. Unfortunately this meant we couldn’t blame not passing our exams on poor snow conditions. The first week was action packed. Lots of skiing and lots of video analysis sessions getting into our individual technical skiing. We also had to deliver two teaching sessions to our peers on the beginning stages of learning to ski. At the end of the week, we sat down with our examiner individually and were informed of how close we were to passing next week. A good rest was required at the weekend to recharge our batteries ready for the final week ahead.

Crash in the bumps

The weather in the second week was astonishingly good. Sunny, but not hot importantly. Very cold temperatures down to minus fifteen on some days meant the piste was firm but with a good amount of snow on top. Wednesday was probably one of the most rigorous ski days we had as we lapped around our examiner countless times performing short and long turns as well as bumps, steeps and variables. I also had one of my more spectacular wipeouts on a run of bumps which was caught on camera by the examiner. One ski popped off about halfway down, I slid face first for the rest of the pitch followed by a pretty big thud as I fell off the ledge at the end. Watching it back on video with the rest of the group during the analysis session was pretty embarrassing but you have to laugh. I was reassured by my examiner that this run wouldn’t affect my ability to pass the course.

Result of the BASI Level 2 Exam 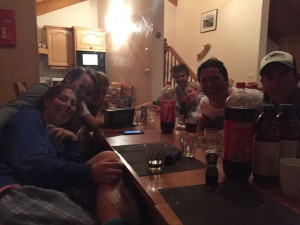 I hadn’t given the final day much thought until it arrived at a worryingly quick rate. We performed three runs of everything from plough turns through to bumps and then we found out if we passed after our last run. Everyone had to watch one by one as our friends found out their result. Then having to do our last run with the worst nerve induced jelly legs was really tough.

The feeling of all the hard work you put in, not only during the exam period, but the whole two and a half months out here paying off was so satisfying. Also to see so many of my friends get that same result was a very special moment.

It’s hard to put into words how rewarding and enjoyable this past ten weeks has been. I can’t give enough praise to the people I’ve come across from other instructors, seasonaires working in pubs and bars and especially the friends I’ve made on this course. They are responsible for this unforgettable experience.