Hi. I’m Pete and i was on the Altitude Level 3 BASI ISIA Instructor training with Altitude in 2012.

I keep a diary and will be updating a few things that we did on the course, i hope this is interesting.

Monday 27th Feb 2012: The morning session today was with Jon West and we were working on a variety of drill for short turns. We were working on jumping into the fall line and the steering the ski around whilst in complete balance and good posture on the ski. We then moved into short turns properly and we slowly were building up the pace and changing the radius of our turns and the speed. We did this by following other people in the group and doing some syncro at the end of the morning.

We then moved into the afternoon session and it was a bumps session with Frederico. This was a largely drill based session on the piste and we popped into some bumps at the end. We started off by pivoting on the centre of our skis to get the feeling of the types of turns we want and then went on to some cross under turns which is vital in the bumps. We moved onto some absorption of bumps by traversing across them. However the icy conditions led to a big wipe out by our resident Yank the second bad one in a week for him. We then moved onto blasting some easy bumps and so ended the day. We are picking up the intensity tomorrow in the same strands as we did today.

Tuesday 28th Feb 2012: In the morning session we were with Jon again and we were continuing with our development of short turns. We started with several drills to ride on our edges move in a short turn. We were using our knees to rock from edge to edge and were picking up speed. The group was then elongating our short turns and making them more performance by increasing the speed and letting our skis run more on a edge and let the skis go away from our bodies and then whip underneath to create the more dynamic turns. We were working at around 80% for most of the morning.

The afternoon session was with Frederico again in the bumps we started with some drills again with cross under being the main drill that we were working on. We then got into some easy bumps and were picking up the pace and difficulty all afternoon until we were lapping some bumps with Freddy at the bottom helping us out but we were skiing at a nice 70-80%.

Wednesday 29th Feb 2012: In the morning we were with Jon again doing shorts and we did a couple of runs of carving to get the movements we want in shorts over a longer period. We were now blasting the shorts around. We were really working hard on it and all had improvements in the dynamic and performance short turns.

To the afternoon and we picked up where we left off on the Tuesday and were lapping around the same bumps all afternoon at a very high pace and having a lot of fun and improvements could be seen in everyones skiing.

Thursday 1st March 2012: When Thursday came around we had a change of skiing in both morning and afternoon. We were mainly doing carving and trying to isolate movements for the carving in the morning. We were training with Jon and it was a very enjoyable session with the focus being slightly different than the last couple of mornings.

In the afternoon we had variables with Antoine and we actually managed to find some very good snow which was nice. We did a couple of laps down the itinerary Tortin and the focus was keeping a larger radius turn and have some fun with it and keeping it flowing. We wanted to have wide quick turns and work on confidence because that’s what variables is all about having fun and improvising. Big thing about it was keeping our head up so you are planning your next move. We had another big wipeout by our resident American so that took it to 3 big stacks in a week. He has done well to stay fully fit. We ended the day with a well earned beer as a group on a nice hot evening.

Friday 2nd March 2012: Full day of race training with Jean Yves over in Bruson was the prospect and was a lot of fun despite the soft and slushy conditions. Those that were there really worked hard and we varied the skis we were using and really noticed the difference in different skis. A very enjoyable day out and we are looking forward to more of the same.

In the evening we had a video session with Jon and we were trying to iron out any flaws and being extremely picky. So ended a very enjoyable week with big changes from all and things came out that need improvements but it was a very successful week for all concerned bring on the next month of skiing including the technical exam. 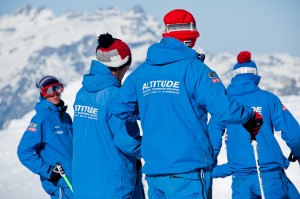