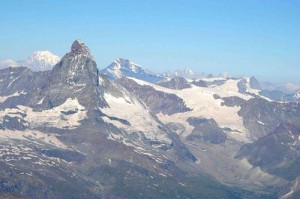 Altitude manager Domenic and snowboarder Dre from Altitude Ski and Snowboard School suffering from a lack sliding around on the white stuff decided to go and find some in July and August.

Rather than go to the usual summer places like Zermatt or Tignes a more adventurous plan was hatch involving hiking up a mountain and then skiing and boarding back down. We did a lot of research on the internet looking at possible summits, something over 4000m, relatively easy climb up with no real technical climbing and of course a route down where we could ski.

Having made a short list we decided the first peak would be the Strahlhorn near Saas Fee at a height of 4190m and if that when well the Zumsteinspitze, 4563m in the Monte Rosa massive from the Italian side.  The route finding for both these peaks looked pretty straight forward and it was an easy walk to the hut where we would be staying overnight. I dug out my old crampons, ice axe and harness, swatted up on crevasse rescue technique and brought a couple of new ice screws, someone had borrowed mine years ago and never returned them (Jim). We waited until there was a clear spell of weather, jumped in the car and headed off.

For the Strahlhorn we parked at Saas Fee, kitted up and took the cable car up to the Felskinn station at 2989m. There was then an easy half hour walk round to the Britannia Hut at 3030m. The hut which sleeps 134 is situated above the Allalin Glacier and was bathed in sunshine when we reached it at about 4pm and gave us a chance for a bit of sun bathing. We signed in and sorted out our kit and checked out the route, which could all be seen from the hut before dinner. The Zumsteinspitze involved a drive over the Grand St. Bernard pass into Italy and round to Alagna. The cable car we hoped to take wasn’t running so we had to take one to a lower point and then a 3 hour hike up to the Gnifetti hut at 3647m which included a couple of section of climbing, luckily they had fixed ropes in place.

Wakeup calls at 3am are never that welcome but after grabbing some breakfast we set off scrabbling down a short rocky pitch onto the glacier, got our crampons on, roped up and set off. The initial sections on both routes were pretty straight forward, easy angled terrain following the glacier up. On the Strahlhorn ascent we were treated to a spectacular sun rise as it came up from behind a ridge of mountains behind us and as the light improved we could see where the best route for the descent would be and where the dangers of the crevasses were. As we progressed the slope steepened and with the increase in altitude the thinness of the air became more and more noticeable. The legs felt more and more leaden and the lungs felt like you were running a cross country race.

The hard slog up, the moments of wondering why on earth you are putting yourself through this and ache of the legs and lungs are all forgotten once you are standing on the summit. The views were spectacular with patches of cloud sitting on the glaciers below which then drop down into the green valleys. After taking the obligatory photos, we dropped down back onto the glacier and finally got our skis and board on. We used the first couple of turns to get a feel of what the snow conditions were like, surprisingly good it turned out considering it was July on a glacier, the main problem was still the lack of oxygen and after 5 hours of hard work with the legs there weren’t exactly feeling fresh. Still it was good to get some turns in especially in such a wide open expanse of snow and ice and it was so refreshing being away from the trappings of ‘civilisation’ with no manmade structures in sight.

The descents took a couple of hours as we were stopping regularly to take in the view, take photos and just enjoying the wilderness around us (nothing to do with tired legs).  The extra effort of carrying skis and boards up now paid off as we slid passed groups of people who looking at us enviously as they were plodding slowly down. The lower snow slopes weren’t as nice as the higher ones as melt water had caused ridges to form in the glacier, anything up to 30cm high and there was always the danger of them catching an edge when you were trying to slow down. We did find one fun gully near the bottom of the Zumsteinspitze, at 40 degrees it was pretty straight forwards and meant we avoided having to down climb the fixed rope section. Once this section had been negotiated there was then the walk back to the cable car, ride down and a quick meal in one of the restaurants before heading back to Verbier to rest some very weary legs.

Note of caution: When travelling in high mountains and on glaciers always make sure you have all the relevant safety equipment and know how to use it. A good level of fitness is required and always know what the weather forecast is.  It is always best to take a high mountain guide. Altitude can arrange high mountain guides see www.altitude-verbier.com or phone +41(0)277 71 60 06