Generally everyone coming to the mountains is here to enjoy themselves and have a good time. Over the years certain conventions and behaviour have developed to make the mountain experience more enjoyable in addition to the FIS rules for safety.

Domenic Cowdell and Jon West of Altitude Ski and Snowboard School have between them worked for more than 34 seasons in ski resorts around the world. ‘Too often we see incidents on the slopes between people that at best annoy and detract from the day, at worst are dangerous’. Below are a few suggestions to think about when on the slopes to help make your day more pleasant.

Carrying Skis: When carrying skis on the shoulder make sure you keep the tails up and tips down to avoid taking anyone’s head off. Be careful when taking them off the shoulder.

Lift Queues: Nobody wants to be in a queue, but unless you want to walk or hire a helicopter we’re stuck with them. Don’t push in, and don’t stand on other peoples skis or boards (skis have feelings too). Also if you do feel the need to break wind remember it takes time for it to seep out of your salopettes so it should always be done well in advance of a lift queue or getting on a cable car or gondola.

On the Slopes: If someone has dropped a hat or crashed and lost a ski, pick it up and take it down to them. This is a good test of skill on the Gentianes – Tortin schusses. When stopping don’t spray people with snow, especially if you don’t know them.

Off-Piste: If someone has put the effort in to break trail, they have first choice of where to ride. It’s extremely rude to jump in before them. On the way down, keep to a corridor and don’t cut right across a pitch so other people can enjoy the powder as well.

On narrow paths, especially skiing down to Medran at the end of the day don’t weave across the whole path if you can avoid it. When overtaking, clicking the poles can let the person in front know you are there and about to overtake. It is worth remembering it is harder for snowboarders to go on a flat board and that they have a blindside.

Enjoy the mountains, let other people enjoy them, be nice, a smile and a wave cost nothing. 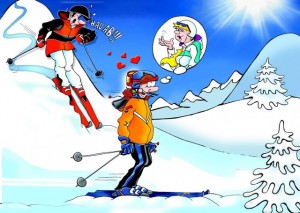